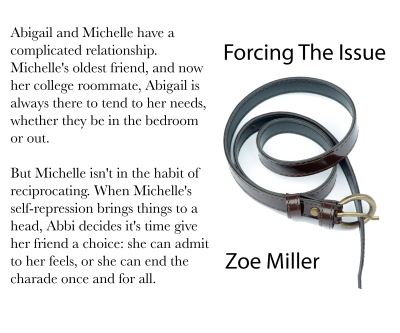 In trying to sort out this blog for (finally) publishing a new story, I realized I’d never put up a link to this one. I guess that’s what happens when you completely abandon the idea for a whole year. Well, for consistency’s sake: here’s a fun, if somewhat emotionally fraught, best friends college affair I wrote a while back!

Michelle picks up the remote. She always leaves the TV on during, and she always puts the volume up too loud. It’s not like there’s ever anything good on Thursday nights; just the usual syndicated sitcom crap, or the news. Talk shows will be on in a half an hour. Sometimes they watch them together, in bed, but there’s an Accounting midterm tomorrow. They have to wake up early. Speaking of which…

And Abigail, with her head between Michelle’s thighs, complies.

Michelle doesn’t use words like ‘clit’ or ‘pussy’, doesn’t say things like ‘use your tongue more’ or ‘put a finger in me;’ she just says ‘faster,’ and Abigail is meant to discern if that actually means faster, or if it means harder, or if it means two fingers when she’s currently only using one.

Michelle’s body is hot. Her scent is potent, and it buzzes around the inside of Abigail’s nose and straight up to her brain. Michelle didn’t shower beforehand. She never showers beforehand, that would probably be too much of an acknowledgment.

Abigail dips her face down into Michelle’s fur. It’s coarse, but Abigail likes the way it lightly scratches at her nose. Michelle’s pubic hair is a shade darker than the hair on her head, but – even down between her legs – Michelle is a blonde through and through. Abigail likes that too. She likes many things about Michelle. She likes her Cheerleader style, her shoulder-length blonde hair, and her pert, athletic breasts, though Michelle’s never let her touch them… Not that Abigail has ever explicitly asked, but she’s tried to, once or twice…

Abigail spreads her mouth and embraces Michelle’s cunt in something like a kiss. She closes her eyes. Her tongue is slow, despite Michelle’s orders. Michelle is always careful not to inhale too quickly; she is always careful to appear relaxed. But each time Abigail shapes her tongue into a blunt point and darts it forward against Michelle’s clit her friend’s knees squeeze, just for a nanosecond, and close in around Abigail’s head like they never want it to leave, like…

Get the rest of “FORCING THE ISSUE” here